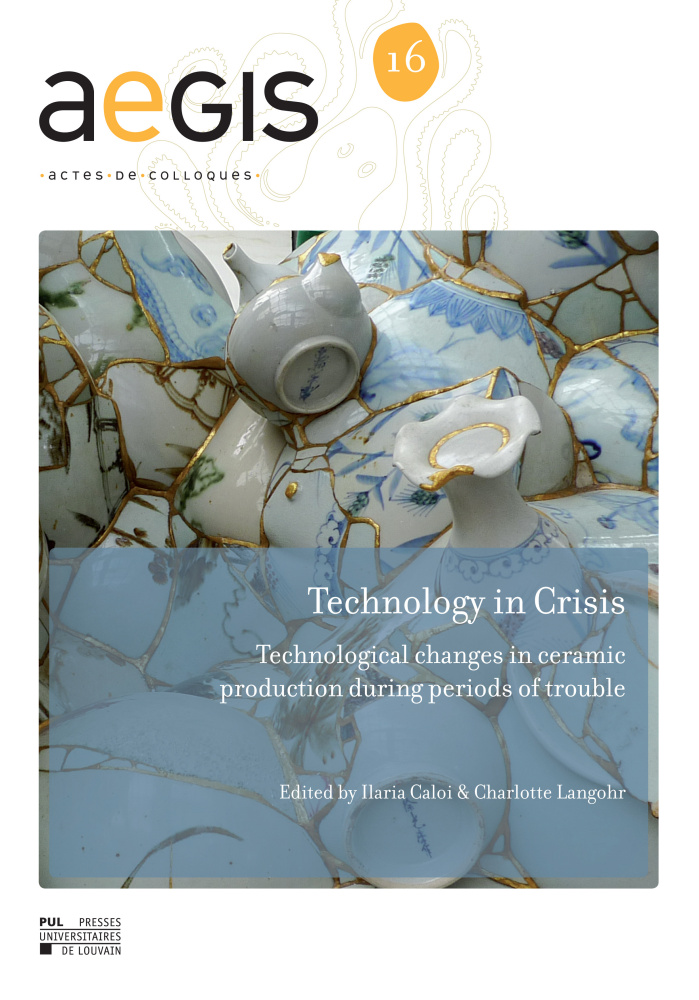 This workshop questioned the reliability of pottery as crisis indicator within the archaeological data set. More particularly, following the perspective of archaeological and anthropological research that assesses pottery technology as a social product, there is an interest in addressing the social and cultural aspects of technological change... Lire la suite

This volume comprises the proceedings of a workshop with the same title which took place in February 2016 at UCLouvain (Louvain-la-Neuve, Belgium). It was organised within the framework of the ARC13/18-049 (concerted research action) "A World in Crisis?". This workshop questioned the reliability of pottery as crisis indicator within the archaeological data set. More particularly, following the perspective of archaeological and anthropological research that assesses pottery technology as a social product, there is an interest in addressing the social and cultural aspects of technological change in pottery production in the specifi c context of crisis and period of trouble. The main goal of our examination was to detect whether and how technological choices or changes observed in the archaeological ceramic record may refl ect periods of transition, disruption, crisis or change pertaining to social, political, economic and environmental conditions. We proposed to address these questions by bringing together experts in charge of the study of pottery at diff erent Bronze Age Mediterranean sites in order to discuss, confront and contextualise their respective assemblages and associated contexts.
This two-day workshop emphasised that the majority of our case studies allow the identifi cation of continuous changes in pottery production systems, i.e. changes that do not evidence any clear cessation of transmission in potting practices. These are interpreted as indicators of periods of transition, of socio-political and economic transformation, rather than moments of crisis or disruption. On the contrary, discontinuous changes in pottery production systems have been observed in those contexts where new paste recipes and/or innovative forming techniques were introduced by foreigners and adopted by local people. Finally, the contributions also highlighted that our observations needed to be replaced in a broader contextual framework, especially in the case of the Late Bronze Age (13th-12th c. BC ) Mediterranean systems' collapse. Indeed, several archaeological contexts here examined have demonstrated a relative continuity of ceramic traditions at the 13th-12th c. BC transition, while other forms of transmitted technological knowledge had abruptly stopped.

1. Technological changes in ceramic production during periods of trouble 21
Methodological approaches and matters of scale
Ilaria Caloi
Charlotte Langohr
2. Firing structures and transition periods in Rajasthan (India, 2005-2015) 35
Valentine Roux
Simone Gabbriellini
3. Craft behaviours during a period of transformations 45
The introduction and adoption of the potter's wheel in Central Greece during Early Bronze Age
Maria Choleva
4. The times they are A-changin' 75
Pottery production and technological change at Mochlos in the earlier Prepalatial period
Thomas M. Brogan
Luke Kaiser
Eleni Nodarou
The contribution of pottery
Ina Berg
6. Change and continuity in the pottery tradition at Kontopigado, Alimos, during the late 13th
and the early 12th c. BC 111
Elina Kardamaki
Konstantina Kaza-Papageorgiou
7. Hand-made pottery groups in Mainland Greece during the 13th and 12th c. BC as a sign of
8. The troubled century? 151
Potting practices and socio-political changes at Mitrou, East Lokris, between the end of the 14th
and the beginning of the 12th c. BC
Salvatore Vitale
12th c. BC transition
Artemis Georgiou
10. Local and imported pottery in the Southern Levant during the 13th-12th c. BC 201
Exploring through the 'crisis’ years
David Ben-Shlomo
11. Crisis years and pottery systems 217
Marco Bettelli
Elisabetta Borgna
Sara T. Levi