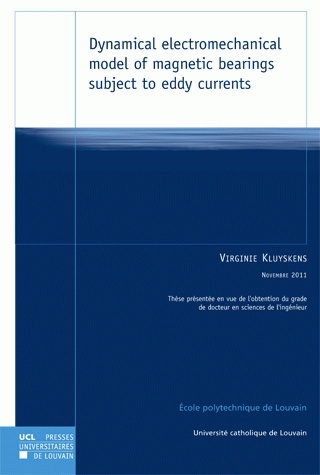 This thesis proposes a phenomenological electromechanical model aimed to explain the physical consequences of the forces due to eddy currents in any type of rotating magnetic bearing. The developed model is able to predict, analyze or simulate the dynamical behavior of these magnetic bearings, or of more complex systems integrating these bearings.

The model integrates the mechanical aspects linked to the rotor dynamics and the electrical aspects linked to the electromagnetic nature of the forces. By a rigorous approach, the electromagnetic forces are modeled by equivalent mechanical components, like springs and dampers. The impact of resistive and inductive effects of the conductors where the eddy currents take place are considered. The presence of the skin effect in the conductors is taken into account via phenomenological models presented in the work.

It is explained how the parameters characterizing the proposed model can be identified on the basis of simple quasi-static finite elements simulations or experiments. This identification is applied to different study cases and shows that the forces predicted by the model fit well with those obtained from finite element simulations.

Finally, the model is useful to better understand the influence of the model parameters and physical parameters on the bearing stability and on the stiffness induced by the eddy current forces. It also provides some guidelines for the design of magnetic bearings. This work shows the model ability to simulate the dynamical behavior of more complex systems such as a magnetic bearing with damping between the stator and the fixed frame.